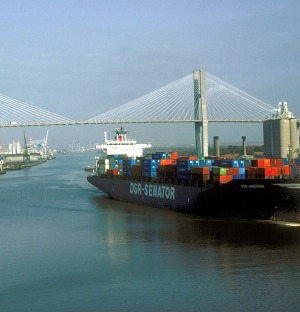 Eugene Talmadge Memorial Bridge over the Savannah River, at the Port of Savannah, Georgia, the largest single container terminal in the United States. Photo (1998) by Jonas N. Jordan, U.S. Army Corps of Engineers.

“The Next Generation of International Trade Agreements” is the timely title of this year’s annual conference organized by the Georgia Journal of International & Comparative Law and Dean Rusk International Law Center, University of Georgia School of Law. Set for Monday, September 18, 2017, the daylong conference will celebrate the 40th anniversary of the Center.

Scholars and practitioners from North America and Europe will come together to discuss one of the most pressing topics in today’s international arena. Panels, which will follow introductory remarks by Georgia Law Dean Peter B. “Bo” Rutledge and yours truly, Center Director Kathleen A. Doty, are as follows:

Issues these experts will explore include, as described in the concept note:

“International trade law is at inflection point. Until quite recently, international trade agreements appeared to be moving along a relatively predictable trajectory. Reforms and changes were discussed and negotiated, but mostly along the margins of a supposed consensus about the general direction of the field. Political events of the past year, though – Brexit, the United States’ abandonment of TPP, calls to renegotiate NAFTA, accelerating negotiations of RCEP, and China’s roll out of its One Belt One Road initiative, among others – have challenged that trajectory and sent policymakers and trade lawyers in search of a new trade compass. A new period of negotiation and renegotiation, however, is on the horizon. While this is a source for many of anxiety, it is also an opportunity for progress, reform, and creative thinking. This conference will bring together top scholars and practitioners in the field to discuss the directions forward for international agreements. What should be on the table as old agreements are reopened and new ones are negotiated? What changes are needed to adapt trade agreements to new economic and technological realities? And how can the next generation of trade agreements respond to globalization’s discontents?”

Details and registration here for the conference, for which CLE credit is available.

(Cross-posted from Exchange of Notes)