“Let us leave here renewed in our devotion to justice – not just for the people of our own countries, but for the people of all countries.  Let us leave here refreshed in our determination to defend human rights, to protect human liberty, and to uphold human dignity wherever and whenever it is threatened.”– Commemoration of the 70th Anniversary of the Nuremberg Trials, U.S. Attorney General Loretta Lynch (Sept. 29, 2016)

On September 29-30, 2016, the Tenth International Humanitarian Law Dialogs convened in Nuremberg, Germany. Normally held at the Chautauqua Institution, this year’s special location was chosen to commemorate the 70th anniversary of the close of the Nuremberg trials, where the Allied Powers tried Nazi war criminals for atrocities committed during World War II. Intlawgrrls, the Whitney R. Harris World Law Institute at Washington University in St. Louis and New York University’s Center for Global Affairs are among the sponsors and long-time supporters of the IHL Dialogs, which gather prosecutors, jurists, and nongovernmental partners to discuss issues involving international justice that extend beyond the walls of any one court or tribunal.

This year’s IHL Dialogs opened on Thursday, September 28 with an inspiring program in Courtroom 600, the small, iconic courtroom where 22 defendants were tried at the International Military Tribunal. The Keynote Speakers included ICC Chief Prosecutor Fatou Bensouda, who spoke powerfully about the shared responsibility that people and States around the world have to address atrocity crimes and the arc of justice’s continual bend towards accountability, and U.S. Attorney General Loretta Lynch, who gave a beautiful, reverent speech about the potential power of fairly-applied justice and the rule of law, stating that by seeking justice rather than vengeance, Nuremberg participants showed that “war does not have to be the final arbiter of human affairs.”

“Certainly the onslaught of evidence of man’s inhumanity to man can leave one dispirited and discouraged.  But we cannot – and we should not – give in to despair, because the legacy of Nuremberg is that when we are called to confront the evil that walks this earth, we turn to the law.  When we need to mete out justice to those who have reaped the whirlwind and revel in the chaos resulting therefrom, we turn to the law.  And through the law we give voice to those shattered souls who seek redress, and we provide a reckoning to those who trade in fear and trembling.  Let us never forget that within these walls, evil was held to account and humanity prevailed.” – Commemoration of the 70th Anniversary of the Nuremberg Trials, U.S. Attorney General Loretta Lynch (Sept. 29, 2016) 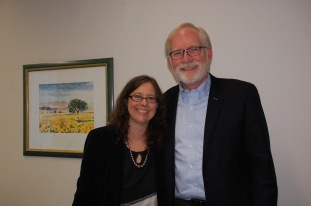 On Friday, September 30, the day’s discussions centered on the 2016 IHL Dialogs’ theme, “A Lasting Legacy for the Future.” The Honorable Joseph Kamara (Attorney General of Sierra Leone and former Deputy Prosecutor of the Special Court for Sierra Leone) cited SCSL cases as examples of the intricacies in making prosecutorial decisions on how to charge crimes of sexual violence to accurately capture victims’ experiences, and gave an inspiring account of the mutually beneficial relationship that national and international courts can have as post-conflict states work to hold perpetrators accountable, create a factual record of atrocities, internalize past events and seek justice on behalf of victims. Professor John Q. Barrett provided a perceptive historical analysis of the Nuremberg trials’ “shining moment of consensus” and explained how their setting in Germany, where lawyers were confronted first-hand with the war’s remnants and casualties, added to participants’ understanding of the trials’ necessity and historic importance. In his Keynote Address, Ambassador Hans Corell drew on lessons from his distinguished career in international diplomacy to highlight the global cooperation that will be necessary in addressing future humanitarian crises, especially in assisting populations that will be displaced by climate change in the coming decades. He challenged attendees to continue to evaluate the mixed record of compliance with the Nuremberg principles, including acts of aggression committed in modern times.

Professor Leila Sadat with ICC’s Sam Shoamanesh, Chief Prosecutor Fatou Bensouda, and Deputy Prosecutor James Stewart in Courtroom 600 on the occasion of the 70th anniversary of the judgments at Nuremburg.

The afternoon session of the Dialogs included a roundtable where Prosecutors discussed recent cases and addressed overarching practical and theoretical challenges facing their respective courts. ICC Chief Prosecutor Fatou Bensouda explained the ICC’s limited potential role in the Syria conflict, noting that any ICC jurisdiction would likely be narrow and based on personal jurisdiction over foreign nationals involved in the conflict (if any have the requisite level of responsibility for atrocities appropriate for ICC prosecution). ICTY Prosecutor Serge Brammertz noted that the breadth and depth of the Syria conflict might make it a better candidate for a locally-owned judicial process, but that it would be hard to find individuals perceived as neutral to run any effort. The Prosecutors also discussed important observations, such as how sexual violence and forced marriage cases were prosecuted differently but effectively in response to the different statutes and caselaw governing the various tribunals. Many Prosecutors, including Brenda Hollis of the Special Court for Sierra Leone and ICC Chief Prosecutor Fatou Bensouda, noted the need for greater transparency and outreach to ensure that societies understand courts’ mandates, hold realistic expectations of their roles and cooperate with prosecutions. Following the roundtable, German professors and historians provided an enlightening historical and cultural perspective on the evolution of Germans’ support of the Nuremberg trials throughout the twentieth century. Lastly, Professor William Schabas and Ambassador David Scheffer supplied a nuanced exchange of impressions about the trials’ legacy to wrap up the day’s discussions. The Dialogs officially concluded with the Issuance of the Nuremberg Declaration, composed and signed by all the international Prosecutors. Professors Sadat and Trahan are pleased that they, once again, could represent their respective schools and participate in the Dialogs. The Dialogs will return to Chautauqua, New York for their eleventh year in fall 2017.