We are witnessing a growing trend of “closing space” for civil society actors – a term which refers to restrictions that authoritarian and right-wing governments are imposing to obstruct and limit oppositional voices. The UN Special Rapporteur on the Situation of Human Rights Defenders receives complaints from activists world-wide about closing space, and reports that one-third to nearly one-half of which concerned WHRDs in the years from 2004 to 2014.

Women and lesbian, gay, bisexual, transgender, queer, and intersex (LGBTQI*) human rights defenders the world over are targeted in the closing space phenomenon both for who they are as well as for the work they do. These defenders are targeted because they are often “perceived as challenging accepted sociocultural norms, traditions, perceptions, and stereotypes about femininity, sexual orientation, and the role and status of women in society.” Yet, only limited analysis has been made of their experiences of closing space. 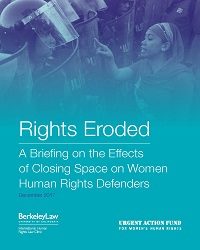 In response, the International Human Rights Law Clinic (IHRLC) of Berkeley Law and the Urgent Action Funds for Women’s Human Rights (UAF) conducted a review of the laws and their impacts on WHRDs in 16 countries. Our report Rights Eroded: A Briefing Report on the Effects of Closing Space on Women Human Rights Defenders offers a window on the challenges women and LGBTQI* human rights defenders face as well as their resistance strategies and recommends action international and state authorities as well as donors should take to protect these front-line activists.

Women and LGBTQI* human rights defenders interviewed for the report spoke of their experiences of structural and social discrimination, targeted efforts by the State to hinder their work, gendered forms of harassment, and criminalization of their activities. They described a climate in which States have moved to restrict their access to the funds essential to their work. Governments have applied a complex web of rules including anti-money laundering and national security legislation to ensnare organizations engaged in legitimate human rights work. They emphasized how social stigma and targeted campaigns by the State to delegitimize their work undermine public support for their activities and limit the resources available to them. Activists revealed the ways in which they self-censor to avoid confrontation and abuse from State actors. And, importantly, they cataloged the strategies that they employ to resist closing space through alliance building with other human rights activists, leveraging media attention, and adopting new funding strategies. END_OF_DOCUMENT_TOKEN_TO_BE_REPLACED