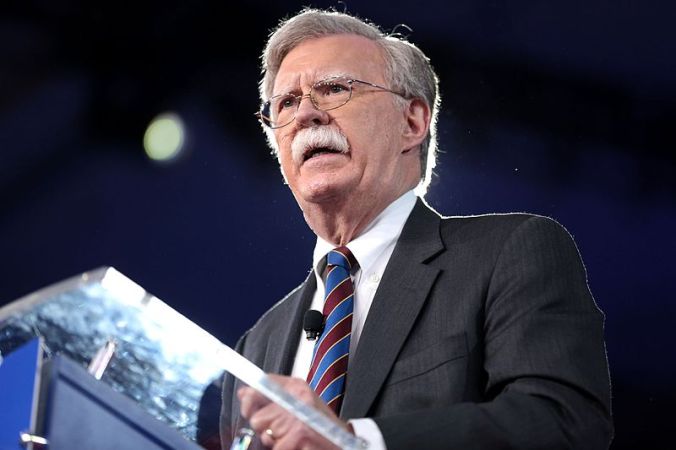 It has long been known that US National Security Advisor John Bolton is no fan of the International Criminal Court (ICC). But today marked a dramatic step up in his rhetoric, ahead of the ICC’s decision about an investigation into possible war crimes and crimes against humanity in Afghanistan. Despite the fact than any ICC investigation will probably focus on the Taliban, the US is worried that American troops stationed in the country may be vulnerable to prosecution.

Ahead of the ICC’s announcement, Bolton claimed that the US will “ban its judges and prosecutors from entering the United States. We will sanction their funds in the U.S. financial system, and, we will prosecute them in the U.S. criminal system. We will do the same for any company or state that assists an ICC investigation of Americans.” (However, it seems unclear if the President actually has the legal authority to do this.)

John Bolton is right about one thing: the ICC should not be able to prosecute Americans for war crimes or crimes against humanity. The fact that the ICC can reveals huge gaps in the American domestic legal system’s ability to hold citizens and foreign nations residing in the US accountable for mass atrocities.

Bolton’s pronouncements to the contrary, the ICC only has jurisdiction over crimes included in its statute committed by citizens or in the territory of states party to the Rome Statute. That is why the ICC only theoretically has jurisdiction over Americans for crimes committed in Afghanistan (and not, for instance, Yemen). Furthermore, the ICC is a court of last resort. The principle of complementarity means that the ICC can only prosecute individuals if other states are unwilling or unable to prosecute them first.

Despite Bolton’s claim that his opposition to the ICC is to protect American service members, US military personnel are arguably more protected from ICC prosecution by the principle of complementarity than other American civilians. The US military’s court martial system is generally ‘willing and able’ to hold service members accountable for war crimes and crimes against humanity. However, there is a huge gap in the American legal systems’ ability to hold American civilians and foreign nationals residing in the United States accountable for crimes against humanity and war crimes committed abroad.

END_OF_DOCUMENT_TOKEN_TO_BE_REPLACED

In late May 2017, Erik Prince, former Navy SEAL and founder of the private security firm Blackwater, sparked an intense debate when he laid down his proposed plan to restructure the war in Afghanistan by increasing the reliance on private contractors. Critics of his plan feared unaccountable mercenaries reaping benefits of the long-going conflict. Proponents argued that private contractors would be a cheaper alternative and could deliver better results. Trump recently decided to focus on a troop increase instead of the private sector solution. While Prince’s plan will disappear in the archives of the White House – for now – the question of how to deal with private military and security companies remains.

The privatization of security is a complex issue. Some believe that it threatens the monopoly over the use of force and state sovereignty. But to understand this complex industry in general and Prince’s plan in particular, it is essential to question whether private contractors actually qualify as “mercenaries” and whether they are unaccountable, as many claim. It is time to bring the law back into the debate and stop throwing around buzzwords without understanding their legal basis.

In the media outcry following Prince’s proposal the private contractors were predominantly labelled as mercenaries. Mercenaries are defined in Art. 47 of the Additional Protocol I (AP I) to the Geneva Conventions. The same definition is also relied on in Art. 1 of the UN Mercenary Convention. To be considered mercenaries, contractors would, among other actions, need to take direct part in hostilities, be motivated essentially by the desire for private gain and be neither a national of a party to the conflict nor a member of the armed forces of this party.

According to Prince’s plan, the contractors working as trainers and mentors should have been embedded with the Afghan military. It is complicated to envision how this would work in practice. The contractors could either enlist with the Afghan armed forces for the duration of the assignment (this was done before in Papua New Guinea) or be declared de facto members of the armed forces. A similar solution might have been sought for the members of the private air force.

Over the past two decades there has been a series of scandals implicating UN peacekeepers, humanitarian workers and private military contractors in sexual exploitation and abuse of local people. Perhaps the best known of these are the cases of Cambodia and Somalia in the early 1990s, Liberia and Sierra Leone in 2002 and the Democratic Republic of the Congo (DRC) in 2004.  More recently the film The Whistleblower has publicised trafficking in women by private military contractors employed by DynCorp and seconded to the UN as international police monitors and trainers in post-war Bosnia.  Although less widely reported, there are also non-exploitative sexual relations between peacekeepers and local people.

The response to sex in peace operations has shifted over the last twenty years from an attitude that ‘boys will be boys’ to a ‘zero tolerance’ policy.  The zero tolerance policy, which appears to have been developed as a substitute for an effective legal framework, is itself highly problematic.  My book argues that the regulatory focus should be on preventing, and ending impunity for, sexual crimes committed by international personnel against local people, rather than trying to prevent nearly all sex between international personnel and local people, as the zero tolerance policy claims to do.  It suggests more responsive approaches to sex in peace operations that aim to promote the sexual autonomy of local people, particularly women and girls.