The Brazilian NGO Justiça nos Trilhos will receive the inaugural award from the Human Rights and Business Award Foundation, the recently-formed foundation announced today.  The award, which is accompanied by a $50,000 grant, is made in recognition of “outstanding work by human rights defenders in the Global South or former Soviet Union addressing the human rights impacts of business in those regions”.

As the foundation states in its press release:

Justiça nos Trilhos is an organization working closely with local communities in remote parts of Brazil – including indigenous peoples, peasants, and Afro-descendants – to address human rights and environmental abuses by mining and steel companies, in particular the multinational Vale.

Mining and steel companies have polluted the rivers on which these people depend for drinking water and their livelihoods, polluted the air causing respiratory and eyesight problems, contaminated the soil with industrial waste, displaced communities, and decimated the cultures and lives of indigenous peoples.

The human rights defenders of Justiça nos Trilhos, and the local communities they work with, have been subjected to surveillance and retaliatory lawsuits by Vale.

Information about the Vale mining company is available here.  Two stories about the work of Justiça nos Trilhos, the first of which includes Vale’s responses:

Session on Tuesday at UN Forum on Business and Human Rights

Danilo Chammas, a lawyer at Justiça nos Trilhos, will accept the award on behalf of the organization at a session being held at the United Nations Forum on Business and Human Rights in Geneva on Tuesday 27 November. The session “will be an interactive learning and discussion opportunity, linking the particular experiences of the award recipient and the lessons learned through those experiences to the Forum’s priority issues including human rights due diligence, sector-focused challenges, and the UN Guiding Principles [on Business and Human Rights]”.

Navi Pillay served at the UN High Commissioner for Human Rights from 2008 to 2014. Her tenure was marked by a focus on addressing discrimination on all grounds, including against previously unaddressed groups such as migrants, LGBT people, people with albinism, and caste-based discrimination. She oversaw the 2011 launch of Free & Equal, an unprecedented global public education campaign to promote greater respect for LGBT rights, and the Secretary-General’s endorsement of the Rights Up Front policy, which ensures that every UN department, regardless of mandate, is committed to advancing the protection of human rights.

Attendees can kindly RSVP to Jessie Brunner at jbrunner@stanford.edu. We hope to see you there!

A note about the Handa Center:

The WSD HANDA Center for Human Rights and International Justice is dedicated to promoting the rule of law, accountability, and human rights around the world, in post-conflict settings, developing countries, and in societies grappling with difficult legacies from a historical period of violent conflict. Through research and international programs, the Handa Center supports and helps improve the work of domestic courts, international tribunals, and human rights commissions around the world. Relying on a small core group of lawyers, scholars, student interns, and volunteers, the Center concentrates its resources where it can make a real difference helping people make sense of the past, come to terms with periods of violent social upheaval, and build institutions that will promote justice and accountability. The Center is further committed to increasing awareness and raising the level of discourse around new developments in the fields of human rights and international law. To this end, the Handa Center has dedicated itself to becoming a major public resource center for the study of war crimes and human rights trials, where students, scholars, and legal practitioners can take advantage of new technologies to access unique archival resources from World War II through contemporary international criminal trials. The Handa Center succeeds and carries on all the work of the University of California at Berkeley’s War Crimes Studies Center, which was established by Professor David Cohen in 2000. 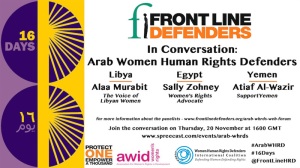 Join the conversation at the Arab WHRDs event page: http://www.spreecast.com/events/arab-whrds 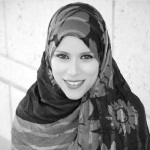 Sally Zohney (Egypt) – Founding member of Baheya Ya Masr, an Egyptian women’s rights movement, Sally has been a active participant in Egyptian social movements since before 2011. Sally organises anti-sexual harrassment rallies and protests in Cairo, and was featured in a recent Front Line Defenders documentary on gender-based violence and harassment against Egyptian WHRDs.

Atiaf Al-Wazir (Yemen) – Co-Founder of the media advocacy group SupportYemen, Atiaf is a researcher and writer focusing on social movements in Yemen, gender dynamics, and the role of regional and international policy. Since the end of January 2011, she chronicled the Yemeni revolution on her blog with commentaries, videos, and photographs.

Viewers will be able to post questions to the panelists throughout the event. Following the broadcast, the video link will be available on the Front Line Defenders website (www.frontlinedefenders.org).