With the most recent mass shootings at Thousand Oaks Bar in California and the Tree of Life Synagogue in Pittsburgh, Americans are once more reeling from the shock and horror of seeing their compatriots mowed down while undertaking normal daily activities. Innocent men, women, and children have been killed or injured whilst worshiping; enjoying a concert; spending an evening out with friends; attending school; or simply being in the wrong place at the wrong time. Each time shots ring out, the media is full of conversations about “gun rights” and the Second Amendment. But what about human rights? What about the right to life; the right of association; the right to health; the right to safety and security; the right to attend school and receive an education?

On November 2 and 3, more than 150 people attended a conference at the School of Law entitled, The U.S. Gun Violence Crisis: An Interdisciplinary and Human Rights Approach. Co-sponsored by the Whitney R. Harris World Law Institute at Washington University School of Law, the Washington University Institute of Public Health, The Public Interest Law & Policy Speakers Series, and the American Branch of the International Law Association (International Human Rights Committee), the event brought together leading scholars and experts in the fields of law, psychiatry, sociology, medicine, and public health policy to focus on new approaches to the U.S. gun violence epidemic. 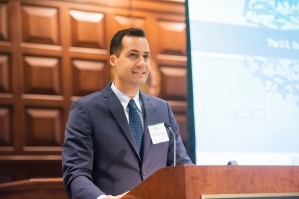 Mike McLively, director of the Urban Gun Violence Initiative at Giffords Law Center to Prevent Gun Violence, opened the conference by highlighting the scope and scale of the U.S. gun violence epidemic. He noted that more than 30,000 people die each from gun violence – violence that is, for the most part, easily prevented by simple and common sense regulation or even executive action. He noted that more than 60 percent of those killed by gun violence have committed suicide with a gun; deaths that were largely preventable through simple measures like waiting periods to purchase firearms. Others noted the disproportionate impact of gun violence on communities of color and young people, as well as the exportation of the U.S. gun violence crisis to third countries through the trafficking of weapons from the United States. The usefulness of international human rights regimes in reframing thinking about this issue, and the important work already being done on this issue by U.N. bodies was noted by several participants. Barbara Frey, in particular, has worked on this issue for many years at the U.N. in her capacity as the alternate U.S. member of the U.N. Sub-Commission on the Promotion and Protection of Human Rights and as Special Rapporteur to the Sub-Commission on the issue of preventing human rights abuses committed with small arms and light weapons.

Lee Epstein, Ethan A.H. Shepley Distinguished University Professor, spoke insightfully about the history of the relationship between the Second Amendment in the U.S. Supreme Court and the evolution of conversations around gun rights. Professor Epstein noted that the relatively recent emergence of an individual right to bear arms can be traced to a flurry of recent law review articles advocating for this position. She suggested that further social science research and legal research could therefore contribute to the solution of the current crisis.

Finally, Philip Alpers, founder of GunPolicy.org, concluded by offering a comparative analysis of the crisis and its resolution in Australia as a result of legislative action, gun buybacks, and a change in legal and popular culture with respect to guns and gun ownership.

During the second day of the conference, speakers met to discuss the conference, as well as a Report on the topic prepared by Harris Institute Fellow Madaline George and myself. The Harris Institute’s Report, which concludes that the U.S. government has failed in significant respects to adequately protect the human rights of individuals living in the United States from gun violence, will be published in the coming months. The papers from the conference will appear in a special symposium issue of the Washington University Journal of Law and Policy in 2019. The Institute has already presented testimony on the U.S. Gun Violence Crisis to the Inter-American Commission on Human Rights and is working on testimony before other human rights bodies as well.

To learn more about the Harris Institute’s Gun Violence Initiative, visit our website.