The United Nations Convention Concerning the Status of Refugees, 1951(‘Convention’) is the centerpiece of international refugee protection that provides protection to individuals who are forced to flee their homes due to a well-founded fear of persecution. The United States of America (‘US’), one of the treaty’s signatories, has adopted Article 1(A) of the Convention without any substantial reservation, understanding or declaration (‘RUDs’). Section 101(a)(42) of the Immigration and Nationality Act, 1952(‘INA’) grants asylum if an alien is unable or unwilling to return to his/her country of origin because s/he has suffered past persecution or has a well-founded fear of future persecution on account of ‘race, religion, nationality, membership in a particular social group, or political opinion.’

Notably, both the Convention and the INA leave out ‘gender’ as a ground for persecution. However, this has not stopped women from making claims of asylum on the basis of their gender. In fact, the US records a 30-year-long quest in establishing gender as a protected category in asylum law. In the recent decision of Jaceyls Miguelina de Pena-Paniagua v. William P. Barr (‘De Pena’) the US Court of Appeals for the First Circuit recognized gender as a legal basis for granting asylum, allowing the US to finally become a safe haven for women fleeing domestic violence. The Harvard Immigration and Refugee clinic that represented the asylee, a Dominican woman escaping domestic and sexual violence, expressed that the Judge saw domestic violence for what it was–persecution for her gender, and that the decision has finally put gender on par with other grounds for asylum.

In order to obtain asylum, an asylum-seeker must prove past persecution or a well-founded fear of future persecution. The term ‘persecution’ has not been defined in the INA or Convention. There is no universally accepted definition of persecution, however most acts of bodily violence have been recognised as such. The Board of Immigration Appeals (‘BIA’) has defined persecution as a ‘threat to the life or freedom of, or the infliction of suffering or harm upon, those who differ in a way regarded as offensive.’[i]

While considering the case for women, instances of persecution can be split into two categories:

Evidently, in both categories, women are persecuted because of their gender and their particular societal status as women.  If persecution is studied as a means of exerting control over a race, religion or particular social group, it is clear that women fit this bill.

Additionally, the asylum-seeker must also prove that she is unable or unwilling to return to, or is unable to avail protection from persecution in, her home country. Interestingly, in most cases of persecution of women, the government and the law enforcement are unresponsive to domestic violence or sexual violence, and in some cases, are even responsible for it.

Women as a Particular Social Group

Defining a PSG is extremely important because, depending on how narrowly or broadly it is construed, it can result in vast differences in who is granted asylum. The UNHCR Executive Committee in 1985 recognised that women asylum-seekers who face harsh or inhuman treatment due to their having transgressed the social mores of the society may be considered as a PSG. In 1991, the UNHCR issued guidelines on the protection of refugee women in which it reiterated the same principle. The US BIA also has provided some guidance on the matter. In the Matter of Acosta, the BIA recognised that a PSG should share a common, immutable characteristic, such as sex. It is relevant to note that sex and gender are conflated in refugee law. However one can argue that gender is also an ‘immutable characteristic’, as it fundamental to an individual’s identity or conscience. Later, ‘social visibility’ and ‘particularity’ were identified as additional factors for PSGs.

The issue that women face while claiming membership to a PSG is that they have to prove the group’s constitution, characteristics and then establish that they fit the set criteria. This double liability makes it harder for women to seek asylum. While certain women have been successful in making a claim for asylum in the US – women who refuse to undergo the process of female genital mutilation, and victims of domestic violence, there are still gaps that can only be filled by classifying ‘women’ as an independent PSG.

Case for the wider group of ‘women’

The decision of the First Circuit in De Pena makes an effort to classify women as a PSG. While the asylee only made a case of belonging to the PSG of Dominican women who were unable to leave or escape a domestic relationship, the court positively considered and advocated for the wider category of ‘women’ to be classified as a PSG.

The main objection in construing ‘women’ as a PSG, is that it encompasses a large number of people and this will open floodgates to a large number of women seeking asylum.[ii]But in De Pena, the court acknowledged the view of Perdomo v. Holder that if race, religion and nationality refer to large classes of persons, PSGs may do as well as they are equally based on innate characteristics. Therefore a PSG cannot be rejected because it represents too large a portion of the population as this would misunderstand the function of the protected categories. Gender, like all other grounds, only functions to recognise the reason an individual is persecuted and does not imply anything larger.[iii]

While US asylum law only recently has recognized gender as a protected status, other countries set a good example for the way forward. In 1993, the Immigration and Refugee board of Canada released guidelines for gender-related persecution. Interestingly, this has not led to an explosion of claims. Further, in 2006, the House of Lords recognized that gender alone may fall within the definition of a PSG. Such definitive cases and specific guidelines aid the cause of women asylum seekers, and go a long way in recognizing the case for women as a particular social group.

20 years after the ICC was established, the Court is poised to rule on the meaning of one of the most controversial words in its statute: ‘gender’.

Until recently, it didn’t look as if the Court would be interpreting the g-word any time soon. But in November 2017, Prosecutor Fatou Bensouda cited evidence of gender-based persecution in her request to open an investigation in Afghanistan, suggesting that the Pre-Trial Chamber would need to interpret this crime in the foreseeable future.

Jurisprudence on this point looks even more imminent now, following the arrest of Al-Hassan Ag Abdoul Aziz Ag Mohamed Ag Mahmoud, who the Prosecutor alleges was the chief of the Islamic police in Timbuktu, Mali, in 2012 and 2013.

END_OF_DOCUMENT_TOKEN_TO_BE_REPLACED

Sexual and gender-based crimes were high on the ICC’s agenda in 2016 – a trend which looks set to continue this year. In March 2016, the Court handed down its first conviction for rape, and in December, its first trial to feature charges of forced pregnancy and forced marriage began.

There was also a focus on sexual and gender-based crimes in situations under preliminary examination, including the crime against humanity of ‘gender-based persecution’, which has never before been prosecuted by an international criminal tribunal. 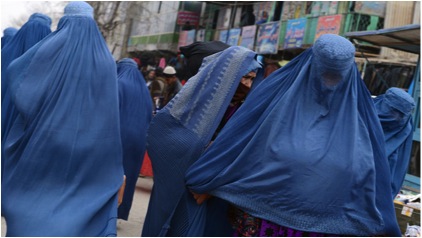 Women in Afghanistan, one of the two preliminary examinations where the ICC Office of the Prosecutor is reviewing information on gender-based persecution (Photo credit: Shah Marai / AFP).

This focus on gender-based persecution can be seen in the ICC Office of the Prosecutor’s most recent Preliminary Examinations Report, which gives an update on the ten situations currently under ‘preliminary examination’ (an initial filtering process, in which the ICC Prosecutor reviews information on alleged crimes and decides whether a full-scale investigation is warranted).

The report confirms that the Prosecutor is on the brink of deciding whether to open an investigation into the situation in Afghanistan, which has been under preliminary examination in the since at least 2007.

This investigation, if it goes ahead, will be historic. It will be the first time that any international criminal tribunal, past or present, has looked into war crimes by US nationals. It will also be the first investigation to specifically contemplate the crime against humanity of gender-based persecution – or the first one on public record, at least.  END_OF_DOCUMENT_TOKEN_TO_BE_REPLACED