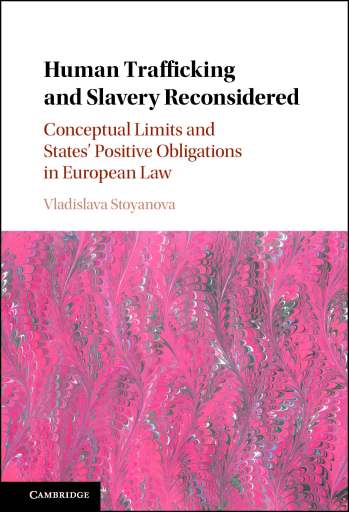 With this post I would like to discusses some of the arguments developed in my newly published book with Cambridge University Press ‘Human Trafficking and Slavery Reconsidered: Conceptual Limits and States’ Positive Obligations in European Law’ (2017) and the more recent developments in the case law of the European Court of Human Rights (ECtHR) under Article 4 of the (ECHR): the right not to be held in slavery, servitude and forced labour and not to be subjected to human trafficking.

Against the backdrop of the rich judicial output of the ECtHR, the case law under Article 4 ECHR is scarce. To be more precise, the existing judgments in which the Court has dealt with abuses inflicted by non-state actors (i.e. employers) reaching the level of severity of Article 4 are eight:[1] Siliadin v. France, Rantsev v. Cyprus and Russia, C.N. and V. v. France, C.N. v. The United Kingdom, M. and Others v. Italy and Bulgaria (the complaint under Article 4 was found inadmissible in this case), L.E. v. Greece[2], J. and Others v. Austria[3]and Chowdury and Others v. Greece. By way of comparison, the judicial output of other human rights bodies regarding the right not to be held in slavery, servitude and forced labour, has not been much richer. The Human Rights Committee has not issued so far a single communication under Article 8 of the ICCPR concerning circumstances that can be generally described as contemporary forms of slavery and human trafficking.[4] The ECOWAS Community Court of Justice has delivered one judgment Hadijatou Mani Koraou, No. ECW/CCJ/JUD/06/08, 27 October 2008, where it found Niger in violation of the prohibition of slavery as set out in the African Charter on Human and Peoples’ Rights; however the factual circumstances can be rather described as de jure rather than de facto slavery. Finally, it was only on 20 October 2016, when the Inter-American Court of Human Rights issued its first judgment under Article 6 (freedom from slavery) of the American Convention on Human Rights: Case of the Hacienda Brasil Verde Workers v. Brasil.

Overall, the scarcity of judicial engagement at international law level with slavery, servitude and forced labour can be described as striking. Since the ECtHR has recently started to engage more often with Article 4 of the ECHR due to new individual applications that have been filed, the Strasbourg Court’s case law might be a valuable source to draw from. In my book ‘Human Trafficking and Slavery Reconsidered: Conceptual Limits and States’ Positive Obligations in European Law’ (CUP, 2017), I review these recent developments under the ECHR and offer a comprehensive analysis of the challenges that needs to be addressed in terms of definitional limits and states’ positive obligations so that human rights law can more effectively respond to the factual reality that reveals that many individuals are subjected to severe forms of exploitation.

As to the definitional challenges, one problematic development that I highlight is the central focus on the concept of human trafficking that has been the dominant frame for conceptualizing abuses. While this development has had some positive effects, it has also led to some negative repercussions that need to be acknowledged. In particular, the concept of human trafficking has brought confusion and obscurity as to the nature and gravity of the harm suffered. It has also led to preoccupation with the abusive migration process rather than the actual abusive conditions in European host countries that might amount to slavery, servitude and forced labour.