As States Parties to the Rome Statute and civil society organizations come together at the annual meeting of the International Criminal Court’s (“ICC”) governing body, the issue of gender justice, and more specifically of sexual and gender-based violence (SGBV), takes centre stage in the parallel meetings. The first week included several events discussing issues of sexual violence, including the investigation of gender-based crimes, and the progress made in gender justice over the last decades. 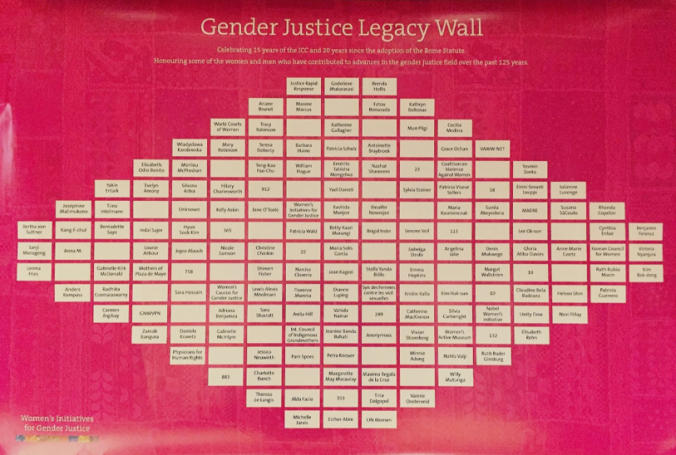 On December 7, the Women’s Initiatives for Gender Justice launched the Gender Justice Legacy Wall to honour 151 individuals who have contributed to raising awareness about violence against women over the past 125 years.

States Parties to the Rome Statute have affirmed the importance of accountability for SGBV crimes as well as the need for greater protection of survivors of sexual violence by making significant contributions to the Trust Fund for Victims specifically earmarked for victims of SGBV. This is not a new item to the agenda; between 2004 and 2016, contributions amounting to almost €5.5 million were earmarked for SGBV victims by UK, Norway, Japan, Estonia, and Andorra. This year, SGBV has remained on the radar with Japan pledging €53,000 and Finland making a multi-year contribution of €800,000 (2017-2020), both earmarked specifically for survivors of sexual and gender-based violence. Although the ICC needs more financial support in this area, the current funding is crucial as reparations are a key component of the justice process.

Nevertheless, no case reaches the reparations stage unless a full and proper investigation has been completed. Hence the need for greater support at earlier stages of the prosecution, and specifically during the investigation. It is for this reason that the decision of the UK to provide £1 million to establish an investigative team that will support domestic justice efforts in Iraq, even if not specifically earmarked for SGBV, is a welcomed and celebrated step in the right direction.

Two events during the Assembly of States Parties (ASP) have highlighted the necessity for the adequate collection and preservation of evidence in cases of conflict-related sexual violence to ensure successful prosecutions. Both the panel discussion on the Professionalization of the Investigation of International Crimes organized by Justice Rapid Response and the event on Accountability for Sexual and Gender-Based Crimes organized by the Centre for International Law Research and Policy addressed the challenges inherent to the investigation of such crimes, such as the quality of evidence collected, and the importance of recognizing the needs of victims and survivors.

With respect to the quality of the evidence collected, if investigations are done incorrectly, the flawed results can pose a significant challenge to subsequent prosecutions. Justice Rapid Response advocates for the identification, collection, and preservation of information that is beyond reproach, hence the need for working with experienced professionals that have received adequate training in sexual violence. JRR recruits and provides rigorous training for a readily available SGBV Justice Experts Roster, including but not limited to regional professionals with legal, investigative, human rights, forensic, and gender expertise. The short documentary “Evidence of Hope”, which was screened at the event, showcases the importance of high quality and timely investigations of SGBV, as well as the role of JRR’s Experts Roster.

The Commission for International Justice and Accountability corroborates the need for a dedicated and specialized unit for the investigation of SGBV crimes. This is a well-established practice that has notably been embraced by the IIIM and other institutions. Indeed, UN Security Council Resolution 2379 establishes an investigative team to collect, preserve, and store evidence of acts that may amount to war crimes, crimes against humanity and genocide by Da’esh in Iraq, which is a welcomed development in the fight against impunity. This reinforces the fact that individuals who collect evidence and who will ensure its reliability need to have the appropriate training and qualifications in SGBV so as to uphold the integrity of the investigation and the credibility of the subsequent judicial proceedings. 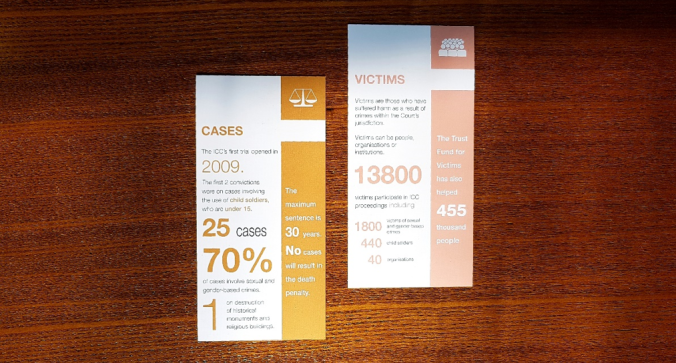 Finally, the interests of survivors need to be fully recognized at every step of the justice process, including the investigation stage. To do so, investigators must balance the probative value of the evidence collected with the potential harm that may be sustained by the survivor during this process. The process should be survivor-centred, and prosecutions should rely less on survivor testimony and instead broaden the evidentiary basis of such crimes. The Commission for International Justice and Accountability spoke of cases where Yazidi women who had survived sexual violence had given their statement up to six times to UN personnel, NGOs representatives, and local authorities. This repetition of statements not only risks endangering the prosecution itself, but it also re-traumatizes the survivors. Hence, prosecutors should rely on more types of evidence, including background analysis, documentation on military structures, and patterns of evidence.

In sum, the discussions taking place at this year’s Assembly of States Parties provide unique insight into best practices for the investigation of SGBV crimes and for their subsequent prosecution in national, regional or international tribunals. The ASP offers an important space to share strategies and allows for the development of concerted efforts towards greater accountability for international crimes. Consequently, we look forward to attending tomorrow’s event on “Prosecuting Sexual and Gender-Based Violence at the Special Court for Sierra Leone” hosted by the Permanent Missions of Canada and Sierra Leone,  UN Women and the Canadian Partnership for International Justice, and to pursue these crucial discussions.

This blog post and Isabelle’s attendance to the 16th Assembly of States Parties in the framework of the Canadian Partnership for International Justice was supported by the Social Sciences and Humanities Research Council of Canada.