The one part of our trip (see Parts I and II for prior travels) that participants are unlikely to forget is a day spent in and around the massacre site of Srebrenica, where 8,300 men and boys were executed in the days starting on July 11, 2005. As we drive to Srebrenica and admire the beautiful mountain scenery and picturesque small farms, it is hard to fathom how ethnic tensions reached that horrible nadir of inhumanity.

Our first visit brings home with great force the stark contrast between Muslim and Serb versions of historical truth—a central concern of transitional justice that most of our students have likely encountered only in the abstract until now. It involves a brief stop at the location of a mass atrocity: the Kravica warehouse, where an estimated 1,000–1,500 Bosnian Muslims were murdered. Because, at that point, we are deep in the territory of Republica Srpska, not a sign marks the spot. Indeed, last summer, the 20th anniversary of the massacre, this site of horror was covered with posters of Vladimir Putin, meant as an anti-EU protest and a call for Russia to veto an upcoming UN resolution on the Srebrenica genocide. By contrast to the lack of commemoration at this site, nearly across the street a large cross looms over a memorial to Serb victims of past wars. Our Bosnian guides always advise caution when we seek to photograph these sites, but last year, due to the tensions unleashed by the 20th anniversary commemorations, we were told not to even leave our bus. 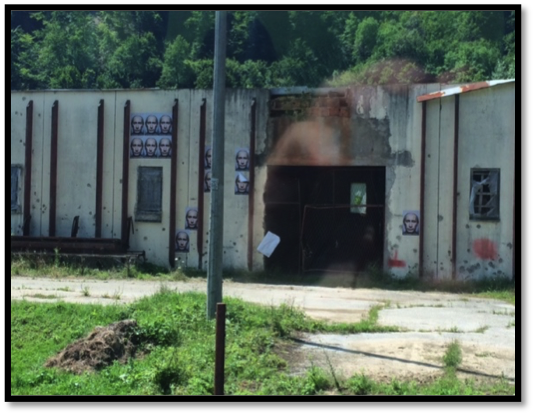 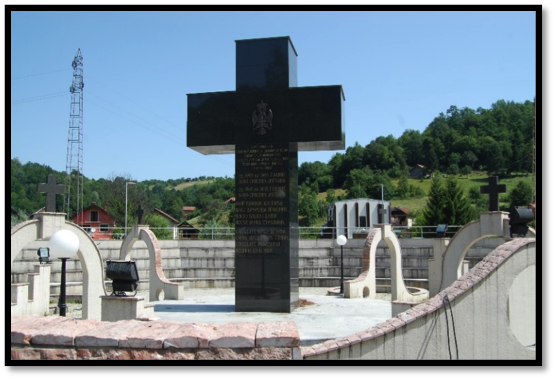 In Bratunac, we pass Hotel Fontana—the command headquarters of General Mladic, currently on trial in The Hague, who led the assault on Srebrenica. We have also been able to visit another memorial in Bratunac, this one to Serbs, mainly soldiers, killed around Srebrenica—a further disconcerting example of contrasting “truths” as well as denial on the part of perpetrator societies. The actual town of Srebrenica, where we stop for lunch, is so small that it is hard to imagine it swollen with 40,000 desperate Bosnian Muslim families seeking sanctuary in the so-called UN “safe haven,” which turned out to be neither “safe” nor a “haven.”

At the Potočari memorial (whose creation was mandated by the international community, since we are still in Republika Srpska, which would have created no such memorial), we lay a wreath to the victims and walk silently among the graves. In the battery factory where men and boys were separated from the women, we tour the memorial room, including the last effects of some of the victims, and read VRS (Army of Republika Srpska) wire intercepts regarding the disposal of “packages” (cynical code for bodies). The use of the word “genocide” throughout the memorial site brings home one powerful legacy of the ICTY: its determination that the massacre at Srebrenica met the legal definition of genocide. The preserved UN (“DUTCHBAT”) barracks, complete with the peacekeepers’ sometimes racist graffiti, provides a graphic reminder of the UN’s powerlessness to prevent that genocide.

As if our visit isn’t devastating enough, we listen spell-bound to a survivor of the column of men who tried to escape the Srebrenica executions by walking through miles of hostile territory. He was one of the few who made it to the Free Territory of Tuzla. We have also had the chance to meet with one of the “Mothers of Srebrenica” who lost all the male members of her family, including her two sons. She returned to Srebrenica, she says, unlike many other Muslims, in order to be reminded of her children by two trees planted in her front yard when they were small. At this point, there is hardly a dry eye in the room–and students begin to understand on a much more fundamental level what, exactly, we are seeking justice for.

END_OF_DOCUMENT_TOKEN_TO_BE_REPLACED

After experiencing the Hague tribunals (see Part I of this post), we travel to the region itself, starting in Sarajevo, Bosnia and Herzegovina—the city that was besieged from 1992-1995. From the moment we arrive and begin to pass buildings covered in bullet holes, students are confronted directly with the reality of a conflict that ended barely 20 years ago. Interaction with survivors of that conflict begins almost immediately: the guide who tells us about the tunnel under the airport that was used to bring in supplies during the siege was involved in building it; the staff at the hotel we stay in, as well as many people we meet in interviews and casual conversation, lived through the siege and lost family members during it. These discussions and conversations heighten the impact of our more official meetings.

We visit the International Commission for Missing Persons (ICMP), which conducts forensic analysis to identify persons killed in the war. Visiting the DNA labs is always fascinating in itself, but we are particularly interested in the crucial role forensics plays in both international and transitional justice. Where private individuals and government officials deny or minimize the number of people killed at Srebrenica, forensic proof of the number of victims and how they were killed becomes a crucial component of criminal trials, as well as one way of establishing the truth and combatting denial. Also, for families whose loved ones went missing, return of the bodies for burial is critical in seeking some level of closure.

Our visit to the ICMP, as well as meetings with other NGO representatives, leave students feeling that much positive work is being done in Bosnia. But they are very quickly confronted with fundamental political problems that defy solution. In our meetings with journalists, academics, survivors, and ordinary people, we hear repeatedly that Bosnia is not a functional state—that it is mired in the regime created by the Dayton Peace Accords, which was never meant as a permanent solution. The two entities that comprise the state—the Muslim and Croat “Federation” and Republika Srpska—coexist uneasily, with very little sense of unity. The pessimism this creates extends to the existing mechanisms of international justice, which were once heralded as at least a partial solution to the region’s problems.

Thus we encounter great skepticism about the ICTY and its role in the region on the part of Bosniaks, who were the main victims of the war. After seeing the courts in The Hague, meeting their committed staff, and learning about their achievements, it can be disconcerting to discover how deeply the hopes they once raised have been disappointed. From our perspective as professors, however, it is very useful for the students to be so directly confronted with the limits of international justice and perhaps take away some important lessons for the future. Importantly, too, despite the often pessimistic and critical responses, no one has suggested that the region would be better off without the ICTY. Those we speak with may be frustrated that the ICTY has not proved to be a panacea for all the region’s ills—for instance, it cannot try a low-level perpetrator who may still live down the block—but ultimately, they admit that things would be far worse had the ICTY never existed.

END_OF_DOCUMENT_TOKEN_TO_BE_REPLACED

Students of international affairs or international law can learn about the field of international justice through textbooks, films, discussions and lectures in the classroom, but an additional depth of understanding comes from traveling to the locations where crimes occurred, observing tribunals adjudicating those crimes, and meeting in the field with court officials, NGOs and victims.

Each year, we lead a group of master’s degree students from NYU’s Center for Global Affairs on a trip to The Hague, Bosnia, and Serbia to learn about war crimes prosecutions and issues surrounding international and transitional justice. We both work in the international justice field, and over the course of years have built up networks of contacts in both The Hague and the Balkans region; we are thus able to introduce students to a broad variety of actors and institutions and thereby expose them very directly to the controversies and pitfalls, as well as successes, of international and transitional justice.

While still in New York, we hold a number of class sessions that provide basic background on the wars in the former Yugoslavia and the ways in which judicial systems and societies deal with the aftermath of mass atrocity crimes. But the trip really begins in The Hague, which puts us on the doorstep of international institutions, even in the literal sense: our hotel is next door to the International Criminal Tribunal for the former Yugoslavia (ICTY). That tribunal has been the focus of our Hague visit, but we also bring students to the International Criminal Court (ICC) and on occasion the Special Tribunal for Lebanon.

To provide some insight into the history of the movement for international justice, we spend some time at Andrew Carnegie’s imposing Peace Palace, the home of the International Court of Justice and the Permanent Court of Arbitration. Whenever possible, we sit in on trials at the ICTY and ICC; in past years, student have had the chance to view the Karadžić and Mladić trials, Haradinaj, Bemba, and others. Sitting barely feet away from accused war criminals and hearing lawyers, judges and witnesses speak brings home the drama—and sometimes the tedium—of international criminal trials.

In addition, we organize substantive meetings with a wide variety of people involved in the courtroom process: these include the various offices of the ICTY (prosecution, defense, judges, outreach, registry) and the ICC, as well as journalists covering the tribunals. Highlights of past years have included ICTY Judge Theodore Meron, ICC Judge Hans-Peter Kaul, Karadžić defense advisor Peter Robinson, SENSE news chief Mirko Klarin, and many others. Sometimes serendipity takes a hand: this year, the chief prosecutor of the ICTY, Serge Brammertz, passed our students as they waited to enter the building and began a conversation with them. At these meetings, students gain insight into the mechanisms of international justice, and profit from speaking directly to people involved every day in the nitty-gritty of preparing and carrying out trials of major war criminals.

The impression they receive is an understandably positive one of successful, if not always perfect, institutions staffed by dedicated, skilled, and often idealistic professionals. But questions about the efficacy of the tribunals on the ground in former Yugoslavia already arise in our discussions about the ICTY’s reception in the region, its outreach program, and its perceived legacy. These concerns increase in immediacy and intensity once we arrive in the region, and they become a central focus of our discussions.   (To read more, see Part II.)