Following the outbreak of violence in December 2013, tens of thousands—and eventually hundreds of thousands—of internally displaced persons (IDPs) sought refuge at UN bases in South Sudan. These sites came to be referred to as Protection of Civilians (PoC) sites, guarded by forces from the UN Mission in South Sudan (UNMISS) under a robust PoC mandate. In response, many international humanitarian actors, ranging from UN agencies to NGOs, sought to live and work ‘inside the wire’ of the PoC sites as well. They wanted to be close to the war-affected populations they serve, and were also seeking to protect their own staff from violent attacks. As a general rule, global civil-military guidance dissuades humanitarian actors from co-locating with military actors in conflict settings. In recognition of the exceptional circumstances, however, the UN Humanitarian Country Team in South Sudan approved the temporary use of military force protection by humanitarian actors; this has enabled them to reside in the sites.

South Sudan’s PoC sites have generated considerable interest from policymakers and scholars alike, some of whom have drawn attention (pp. 39-40) to the complex relationships of diverse international actors operating in the sites. What is missing at this juncture, from a legal perspective, is a robust account of the challenges that co-location in the sites poses for the civilian-combatant distinction in international humanitarian law (IHL). Drawing on field research[1] conducted in South Sudan in 2015, this article highlights one slice of the international community where interactions are shaped by struggles over ‘distinction’: the humanitarian-peacekeeper relationship.

As one UN civilian actor notes, the PoC sites in South Sudan are spaces where the UN mission ‘comes closest’ to humanitarian actors. Another civilian member of UNMISS surmises, ‘I’ve never seen another example where humanitarians and UNMISS work so closely’. This issue of physical proximity is also flagged by a humanitarian NGO actor living in one of the PoC sites. He is concerned that the mere fact of his presence in the site undermines any efforts his organization might make with regard to distinction from UNMISS. An individual working for a different humanitarian NGO picks up this thread. He explains that co-locating with UN military forces leads ‘fiercely independent’ humanitarian NGOs to fear that they are compromising the humanitarian principles of neutrality, independence, and impartiality. It is adhering to these principles, he explains, that helps humanitarian actors to demonstrate they are distinct.

It is apparent that the attempt to safeguard distinction from UN military actors is not always, or only, about compliance with international law. Much of the time, humanitarian NGOs are also hoping to influence local perceptions. One component of this perceptions work involves the attempt to secure the trust and acceptance of the war-affected populations they seek to serve. As one humanitarian actor explains, it is local beneficiaries who matter most; the ‘element of distinction is purely from their perspective’. A number of humanitarian actors are distressed at the prospect of IDPs confusing them with the UN forces that guard the PoC site. One humanitarian NGO actor recounts his experience of being called ‘Mongbatt’ by IDPs when he first arrived. He believes they had confused him with the Mongolian battalion of UNMISS, who had been the first foreigners present when the site formed. Another humanitarian NGO actor describes an incident where IDPs voiced anger with his NGO after UNMISS forces announced there would be no accompanied daily firewood patrols out of the site. Even though his NGO had nothing to do with the decision by UN forces, the IDPs accused him: ‘you don’t help us anyway.’

One way that humanitarian actors attempt to assert their separation from UN forces is by sending visual cues – perhaps by dressing a certain way, or making prominent use of an organizational logo on vehicles, clothing, program sites, and facilities. One UNICEF staff member is confident that such practices help beneficiaries distinguish him from other types of actor. He explains, ‘People look at [the UN] as very big, but people here are very quick to distinguish. They can tell you who runs the clinic, who provides medicine, who dug a bore hole….’ A humanitarian NGO actor likewise believes that when IDPs first began to arrive in the PoC sites, the single reason they felt safe to approach his NGO was ‘because they knew we weren’t perpetrators or military assets.’ He adds that the employees of his humanitarian NGO always want to wear the organization’s t-shirts. They firmly believe the t-shirts protect them because ‘people know that these guys provide water, etcetera. They immediately associate us with a need, which is not just felt, but also expressed.’

Evidently, beneficiaries are not the only local actors whose perceptions pose a concern for humanitarian actors working in South Sudan’s PoC sites. When humanitarian actors strive to physically distance and distinguish themselves from UN peacekeepers, they are also hoping to shield themselves from being targeted with violence by local armed actors. As one humanitarian actor explains, simply standing in the vicinity of UN forces is problematic: it creates the impression that humanitarian NGOs are somehow affiliated with the UN mission. He describes an incident where a soldier from the Sudanese People’s Liberation Army (SPLA) threatened him near the entrance gate to the PoC site where he resides. At the time, he was standing near the UN peacekeepers that guard the site. Even though he had no direct contact with the UN forces, he suspects that simply standing there put ‘me and the peacekeepers in his head, as the same kind of thing’.

A staff member of the UN Office for the Coordination of Humanitarian Affairs (UN-OCHA) describes the difficulty of mediating relationships between humanitarians and military actors in the PoC sites. In a setting dominated by machine guns and people in uniform, he explains, the problem is that he is ‘eating breakfast in the same room as the soldiers, then talking about distinction. How do you have that conversation?’ Subsequently, a member of the UN forces is asked whether such casual proximity in the PoC sites does indeed influence his appreciation of the need for distinction. His response indicates that the OCHA actor’s anxieties may indeed be well-founded. The UN peacekeeper states: ‘If you are so concerned, why do you eat in our cafeteria, why do you drink our water, why sleep in our camp, why use our toilets?’ From his perspective, humanitarian actors who reside in the PoC sites are no different from those who actively rely on UNMISS for protection or logistical assistance. Their claims to distinction are weak, he argues, because ‘they still use us’. Notably, this peacekeeper sees Medecins Sans Frontieres (MSF) and the International Committee of the Red Cross (ICRC) differently from other humanitarian organizations. When MSF and ICRC strive to avoid public dealings with the military in order to protect staff, he is sympathetic. ‘They don’t want to face retaliations and people on the ground need them. People in need come first.’ He adds that he respects MSF’s appeals to distinction, because ‘At least they are really independent and can do everything themselves’.

While there is not space to adequately explore the above findings here, this brief article has attempted to paint a picture of some of the tensions arising between the international actors who operate in the PoC sites. It has been demonstrated that, as they go about their day-to-day tasks of assisting and protecting war-affected populations in South Sudan, international humanitarian actors and UN peacekeepers engage in contests over distinction with each other. It can also be distilled from the above accounts that perceptions have an important role to play – both with regard to how humanitarian actors implement IHL’s civilian-combatant distinction, and also how other international actors experience and evaluate the appeals to distinction that humanitarian actors make. 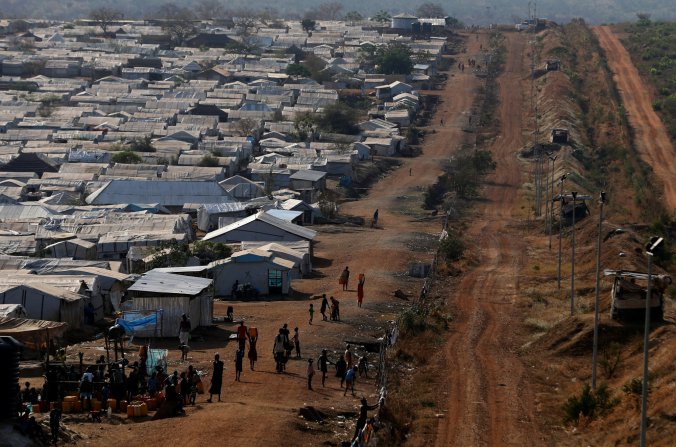 [1] Thank you to the ERC-funded Individualization of War project at the European University Institute, the Pierre Elliot Trudeau Foundation, and the Social Science and Humanities Research Council of Canada for supporting this research.

*This article is cross-posted on the Individualization of War blog at the European University Institute.