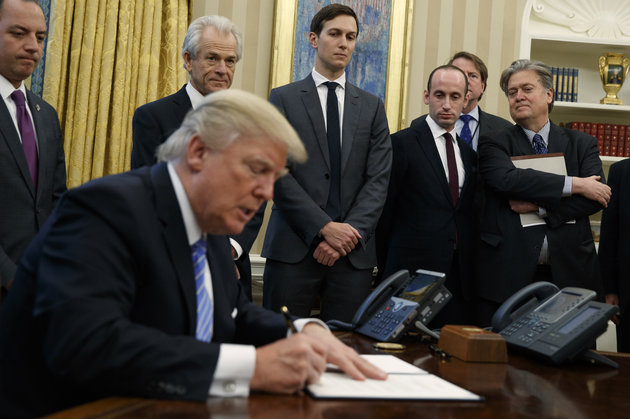 President Trump provoked outrage and ridicule in January when he signed the anti-abortion “global gag rule” surrounded by a group of stern-looking white men. “As long as you live you’ll never see a photograph of 7 women signing legislation about what men can do with their reproductive organs”, Guardian editor Martin Belam commented on Twitter. Sentiment that was echoed far and wide across the media and internet. Yet, men making decisions that affect women in an overwhelmingly male setting is still very much the rule across the board, including at international organisations, courts, and tribunals.

“men making decisions that affect women in an overwhelmingly male setting is still very much the rule across the board, including at international organisations, courts, and tribunals”

Despite making up nearly half of the world’s population, women are sorely underrepresented in the international institutions that determine international human rights standards and are key forums for international relations and global cooperation. This includes the Special Procedures of the UN Human Rights Council, a group of individual human rights experts or groups of experts, who examine and report on human rights. These special procedures oversee the respect of human rights standards by States worldwide, addressing issues such as torture, freedom of expression and discrimination. Historically, only 33.4% of these positions have been held by women. This in spite of the percentage including positions such as the Working Group on the on the issue of discrimination against women, that are usually expected to be held by women only. Currently, 19 out of the 56 Special Procedures have never been led by women, including some, like the mandates on torture and on freedom of expression, that have existed for decades.

While the Human Rights Council has recognised that gender balance is a necessary consideration for the appointment of experts to these positions, no formal procedure has been implemented to guarantee it. As a result, women are less likely to become candidates, less likely to be considered as top choices, and less likely to be elected. This affects the right of women to participate and be represented equally in spaces of authority and decision making; it diminishes the legitimacy and impact of the Human Rights Council and these monitoring bodies; and it reinforces stereotypes about the kind of roles women are interested in or able to aspire to.

In this light, the nominations for appointments during the upcoming Human Rights Council session, starting on 6 June – which includes important positions such as the rapporteurship on the human rights of migrants, and the promotion and protection of human rights while countering terrorism – are of great concern. Out of 21 shortlisted candidates, only 8 are women and none have been ranked as the top pick.

“while a shortlist of candidates from one single region would likely cause great controversy, the near-absence of women in the upcoming Human Rights Council nominations is at risk of going quietly unnoticed”

With this practice, the Human Rights Council – the main human rights body of the UN, which has the equal rights of men and women enshrined in its Charter and treaties – is acting against its own principles. The same UN rule that addresses gender balance prescribes that due consideration is given to equitable geographical representation in the special procedures, and this principle is generally respected. Yet, while a shortlist of candidates from one single region would likely cause great controversy, the near-absence of women in the upcoming Human Rights Council nominations is at risk of going quietly unnoticed. This is the equivalent of no one having noticed that a male US President was signing away women’s reproductive rights surrounded by only men. This needs to change: not only is gender parity an equally important issue as balance in regional representation between the UN member states, it is one that the Human Rights Council is long overdue correcting.

Several organizations and initiatives, including the GQUAL campaign, are currently working to fix these imbalances. They have asked that the Consultative Group of the Human Rights Council adopt gender parity guidelines to guarantee that equal numbers of women and men are shortlisted for these positions. However, these Guidelines, which are yet to be adopted, would still not offer a sustainable and binding solution. What the Human Rights Council should do to achieve this is adopt a Resolution that sets clear markers for achieving better gender balance in its appointments, instructs the Consultative Group and the President of the Council to take gender parity into account when selecting candidates, and calls on Member States to develop practices and procedures that promote gender parity. The  Office of the High Commissioner for Human Rights (OHCHR) should support this. It can take further action to advertise open positions, especially targeting women candidates. The OHCHR should also make use of the powers it already has to postpone elections and extend deadlines if the pool of candidates does not contain a sufficient number of women. It needs to set baselines for representative numbers and enforce them.

“Women are disproportionately affected by human rights issues, ranging from refugee rights to climate change. They must have a voice at all levels of discussion that will lead to decisions that impact them directly.”

Failing to do so, will put the UN Human Rights Council’s overall decision-making legitimacy and capacity at risk. It also places the Council fundamentally out of touch with the current times. Women are disproportionately affected by human rights issues, ranging from refugee rights to climate change. They must have a voice at all levels of discussion that will lead to decisions that impact them directly. If we are serious about changing the picture of men making crucial decisions that affect women, we need to ensure women get an equal number of seats at the table.

This post was co-authored by Nani Jansen Reventlow and Maria Noel Leoni. Nani is an Associate Tenant at Doughty Street Chambers and a 2016-2017 Fellow at the Berkman Klein Center for Internet & Society at Harvard University. She is also a strategic advisor for the GQUAL Campaign, an international platform which seeks to promote parity in international tribunals and monitoring bodies. Maria is a Senior Lawyer for the Center for Justice and International Law (CEJIL) and GQUAL Campaign Coordinator.