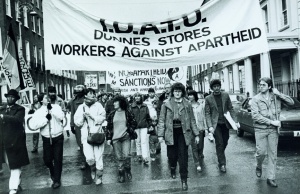 In 1984, Mary Manning, an employee of Dunnes Stores, one of Ireland’s largest supermarkets, refused to check out an Outspan grapefruit. She was upholding a Union directive that none of its members would handle South African fruit or vegetables in protest to the apartheid regime. Manning was suspended immediately, bringing about a strike that was to last almost three years. The picketers lived on £21 a week for the duration of the strike, with some even losing their homes as a result. The strike ultimately ended in a ban imposed by the Irish government on the import of all products from apartheid South Africa. It is a fascinating chapter in the history of apartheid. In the words of one of the strikers: “Twelve workers got government to change the law. Even one person can make a change.”. There is a full interview with Cathryn O’Reilly, one of the Dunnes Stores workers, here. Some of Mary Manning’s thoughts on Mandela’s passing can be found here.