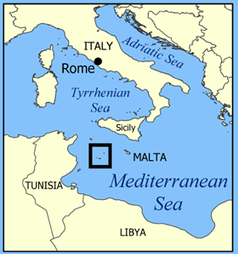 “Lampedusa” long had been a household word among persons who follow human migration, though it was unknown to most others. Yesterday, the new pope changed that.

Lampedusa is a tiny island, about a tenth the size of the District of Columbia. And it’s just 70 miles from Tunisia – as close as Italy gets to Africa. (credit for map showing island inside box) For years, that geography’s made it a prime destination for northbound migrants. Yet as IntLawGrrls posts by Jaya Ramji-Nogales and Anna Dolidze have discussed, Europe seldom has welcomed the waves of persons who’ve set sail for Lampedusa. Stories of push-backs on the high seas and of watery deaths in unseaworthy vessels have been all too common, and yet largely ignored.

Attention came yesterday when Pope Francis I sailed south to Lampedusa. He arrived just hours after a boatload of 166 Eritrean migrants had landed at the same port. The Roman Catholic leader, himself the child of emigrants, cast into the

Mediterranean a wreath in remembrance of migrants who perished at sea. (photo credit) Then he disembarked and celebrated a Mass. His homily (Italian video here; full English translation here) welcomed “the dear Muslim immigrants that are beginning the fast of Ramadan,” then cited the Old Testament and a centuries-old Spanish play in the course of urging resistance against what he called “the globalization of indifference” to the suffering of others – of “the people who were on the boat … the young mothers carrying their babies … men who wanted something to support their families ….”

Transmitted globally by reporters who’d made the journey, the pope’s message touched land not just in Italy, but on all the shores to which humans migrate.